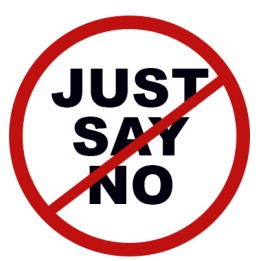 The word “No” kinda gets a bad rap. Parents of young children grow weary of saying it. “Just say no” was the 1980s ad campaign for the war on drugs. We feel bad sometimes when we say it; like when you are asked to do something you really don’t want to do, or don’t have the time, yet feel obligated to say yes.

Saying no is no fun.

The word yes is much more positive, like that Home Alone Macaulay Culkin fist pump YES!

But when you are talking about your finances, saying “yes” can be much worse than saying “no.”

Just ask Lisa and Bryan. They want to reduce their debt and save for retirement. They are saying “yes” to things, when they should be saying no. Especially to family and friends.

It’s hard to say no to those close to us, or even our co-workers and neighbors. But if you are trying to stick to a budget, save for retirement or whatever, “just say no.”

No to Sonic runs. No to that new movie that just opened today. No to the soda at the ball game. (By the way, if you said no to just those three things, you’d have an extra $20 to save.)

But how do you come across without sounding like a Debbie Downer or a Party Pooper?

It’s simple. Tell people you are trying to stick to a budget, save money, save for retirement, whatever. People who care about you, won’t put you through the ringer for wanting save for a rainy day.

You’ve got to stand your ground. And don’t you dare feel guilty about saying no. It’s like peer pressure for adults. It’s like keeping up with the Joneses. There will also be someone with the newest gadgets, eating at the fanciest restaurant, taking the coolest vacations. Get over it. Just say no.

Here are three ways to say no:

A couple of good hardy “nos” and you’ll be a pro at it. You’ll feel better about your decision, and your budget will be saying YES!